Ever since reading The Community of the Beloved Disciple, by Raymond Brown, I can't get it out of my mind. WHO was the Beloved Disciple? Lazarus makes alot of sense, considering it was 'he whom Jesus loved', and he raised him from the dead, and there are very similar references to this in the 'Secret Gospel of Mark', and of course all the other countless points that people make when writing this theory out.
Then also, is the other possibility, Mary Magdalene. Especially if she is the same Mary mentioned in John.
Anyhow... I hope this obsessive 'want to know' passes soon.
I'm really trying to concentrate on things I CAN figure out right now.
But the 'Community of the Beloved Disciple' is a big fascination for me right now.
In other news, Demetrio has smashed himself in the face twice so far this morning. Its only eleven am. Once, he slipped and hit his chin on the bottom of the highchair as he was playing near it. He actually cut open his chin, and then he tripped and fell, clunking himself in the same spot on the chin, on the edge of the coffee table as he went down.
I attribute it to the fact that he is into everything, all the time... go, go go. He makes me tired just watching him. 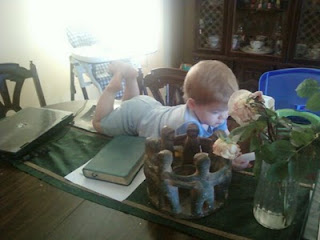 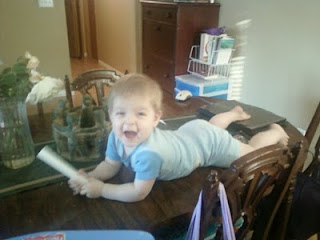