If the weather could be like today all year round, how enjoyable that would be. Warm but not at all hot, slight breeze, sun shining.... Well, ok, in all honesty, I enjoy the rain and storms sometimes also, but temperature-wise it was just delightful.
Today, after our walk, we poked about the garden and sure enough, spring had found its way there!!!
Our lilac tree is in bud, and little green tops of crocuses or grape hyacinth are popping through. The twisted hazel has new growth and leaf buds, as does both elderberry bushes.
Early spring is only matched in love from me by early autumn.
At least this year though, I won't have to detest summer so much. It will no longer be 39 degrees in our house, because we are getting a heat pump/cooling system :D Yippee! I'm so thrilled. No more heatstroke from multiple nights spent unable to cool down, and a better heating alternative for cooler nights. (nights above 0. For nights below 0, the furnace will kick in and do its thing)
I was playing with clay last night and made a little teraphim for my altar. It is a conjoined Mother/Father God . It started out as a female and male figure, but then I decided to blend them into one another. They are faceless.. but have appropriate physical attributes :)

I will paint the Mother black and the Father white. Though the clay is already white, once its dry it will have the rough chalky appearance, and so white paint will look better, especially when next to black paint.
I ordered a new set of tarot cards. Navigators of the Mystic SEA. I was reading about them at Aeclectic Tarot , and they just sounded pretty neat. And the more I looked at different pictures, and read different opinions on them, the more I thought they might be nice for a personal deck. 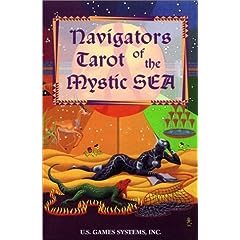 I also got the book for the deck. It's a pretty detailed book, and I found it on eBay for 3.00.
I will stick with my Golden Dawn Magical Tarot deck for workings, as the correspondences in the Navigators deck is different as far as the Tree of Life goes. Julia Tuck (the author of the deck and cards) goes at it from Malkuth back toward Kether instead of the other way around, so I don't want to confuse myself, lol... but I think they might be an interesting deck at the very least.
I've been thinking alot lately about religious vocations. As odd as it might sound coming from a Witch, I really would like to serve the Divine of my self and my fellow brothers and sisters by being able to take on the role of a spiritual Minister/Guide/Priest. Not of the sort that you might be thinking, as after all, I do still have very mystical/esoteric and even hermetic threads of thoughts that make up my spiritual self. There are Gnostic Churches such as the AJC that are accepting of those variances, and I am going to do my best to pursue this.
From the time I first stumbled across Gnosticism at the Ecclesia Gnostica , I knew I was headed in the right direction, and since the birth of Spiral Inward and the forum , I have had the opportunity to learn more, and meet more people and one thing leads to another.
It's like having being lost, going in what seems like circles, and then suddenly recognizing landmarks - although you don't recall seeing them before. You realize that you are in a familiar place, heading in an unknown yet familiar direction.
It's a nice feeling.
at Tuesday, January 19, 2010